The Homestead Act of 1862 offered Americans the opportunity to claim parcels of "public land," occupy and improve it for five years, and then receive title to it. This map visualizes over time and space the more than 2.3 million claims and 900,000 "patents" granting ownership made and issued in the half-century after passage of the act. By 1912, homesteaders had transformed more than 125 million acres—more than 5% of the total acreage of the entire United States—from public lands to private property.

During the same period, Americans and their government dispossessed Native Americans of large portions of the American West. While not doing it full justice, this map pays particular attention to the dispossession of those lands through violence and claims on Indian reservations that the federal government defined as "surplus."

The federal government split most states and territories up into a number of land districts, each with a designated office administering that district. The map shows the boundaries of active land districts for whatever year is selected. The color of the district reflects the relative amount of land that was either claimed or patented there. Districts colored red had a lot of claims or patents; those colored green far less.

Buttons to select claims and patents or some subset of either appear above the map.

You can explore homesteading at three scales—the US, a selected state or territory, or a selected land district—by clicking on the map to zoom in. The timeline and/or bar graph will change to show just the data about that district, state, territory, or the full nation.

When the entire US or a state or territory is selected, a timeline shows changes in homesteading activity between 1863 and 1912. You can jump to any year by clicking on it on the timeline.

When a state, territory, or district is selected, a couple of bar graphs lets you see details about claims and patents over time. It's clickable too to change the year that's mapped.

"Land Acquisition and Dispossession" is part of

An Atlas of United States History 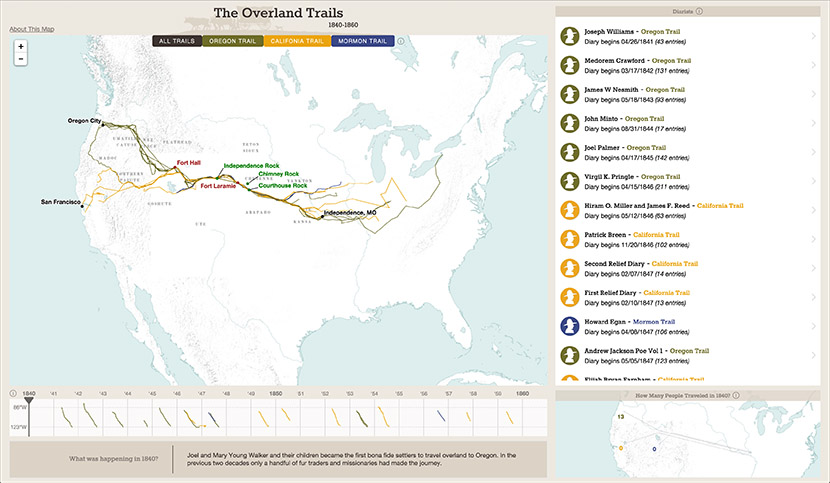